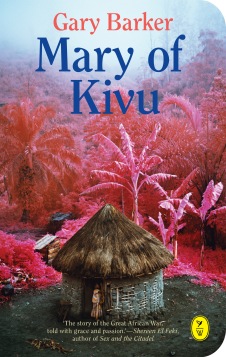 On the shores of Lake Kivu, near the Rwandan-Congolese border, there are reports of a local woman performing miracles. Hundreds of people from nearby villages line up outside the home of Mary of Kivu every day hoping to be cured.  The Vatican sends someone to investigate, as do international women’s rights charities.  Mary shares her story with no one — until the arrival of Keith Masterson, an American journalist looking to add colour to his dispatches on the region’s wars.  In hearing Mary’s story, Keith starts to uncover his own troubled past, one that follows him from his childhood to Lake Kivu.   Set amongst the very real and ongoing conflict in the Great Lakes region of Africa, Mary of Kivu is a compelling and moving reflection on the hurt we inflict on each other, and on the possibility of forgiveness.

‘Mary of Kivu is the story of the Great African War, told with grace and passion. Drawing on his own experience in Congo and Rwanda, Barker depicts the horrors of war (including the sexual brutality that turned this beautiful land into the “worst place in the world to be a woman”) in an intriguing story that shows humanity’s gift to forgive is greater than its genius to destroy.’—Shereen El Feki, author of Sex and the Citadel.

“In the novel Mary of Kivu, author Gary Barker deftly explores the intersection of privilege and privation, and the grace that arises when brutality is met with open-hearted forgiveness. Mary of Kivu is an enigmatic young woman from the Democratic Republic of Congo who has clairvoyant abilities and can heal others with her touch. When Keith Masterson, a successful American journalist, seeks to interview Mary, he unknowingly opens the doorway to his own healing.Barker uses a nuanced eye when examining the motivations and insecurities of the western aid workers who face the tragedy of war from the relative safety of their NGO offices. He also convincingly bears witness to the resilience of the Congolese, forced to endure unfathomable hardships, yet seeking to rebuild their lives with dignity. Barker writes with a simple, raw honesty that is captivating. No one is untouched by suffering in this novel. But the hope of healing and redemption, even in the darkest times, shines through. Mary of Kivu has an enduring, yet timely message: that forgiveness has the power to heal the deepest wounds—and create miracles in the process.” – Kuwana Haulsey, author of The Red Moon and Angel of Harlem.

‘This is an astonishing book, heartrendingly told, of the human toll of the chronic conflicts in Africa and of the capacity for healing. Mary’s story is achingly real, her transcendence at once both fabulous and credible. To enter her world is both bracing and riveting. You will never forget her.’ – Sociologist Michael Kimmel, author of Angry White Men.